The question of Malaysia's schools not doing its part in fostering unity among Malaysians have been brought up again due to TN501, and Business FM did a program to source opinions from the general public.

I followed the podcast on BFM's TALKBACK THURSDAY: UNITY IN SCHOOLS

It was an enlightening podcast that puts light on the thoughts and feelings of the general public on where they think the schooling institution in Malaysia should head in the context as a tool to promote social unity.

The current times questions the difference

By and large the callers basically supported a single-stream school, but many with caveats, such as pointing to the failures of the so-called national school to be to be regarded as a symbol of excellence and is part to blame the rise of so-called vernacular schools.

A Twitter poll by BFM also suggested that the majority who took the poll supported a single-stream school: 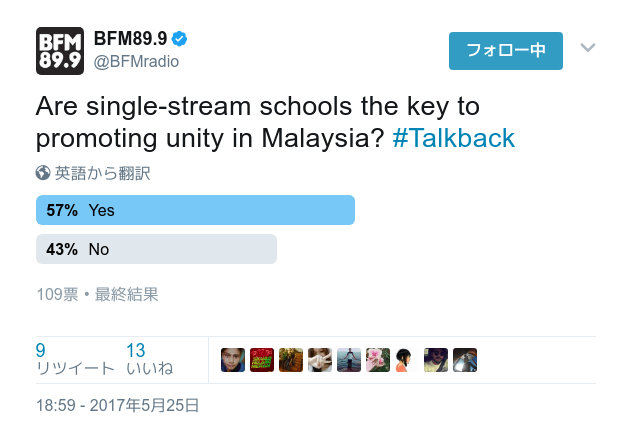 I have my own thoughts on schools in Malaysia, and it's perceived position as a tool for national unity.

Why is education a partisan issue?

Education for our children, by itself is a subject that we should all be in agreement. All of us wants the best for our children. We want them to have good grades, enjoy school life, eat nutritional food at school and grow up a happy, compasionate, intelligent and balanced child. But this issue now has became a partisan issue.

I am also sure that we all agree that as a nation, a good education for our children is an important part of building the future of our nation.

Unfortunately, it has became a partisan issue when we take things which are not directly related to education that aims to develop our children into that balanced human being, such as racial or religious identity into the equation.

Racial or religious identity are exlusive to a particular person or group in the society and these are the things that puts us apart instead of bringing us together. When we bring these identities to the public sphere and relate to them it will of course create exlusitivity and if it's something that not all of us can strive to be (like race for example) then it will eventually create resentment.

Of course, there is absolutely nothing wrong in being a Dayak who is a Buddhist or a half-Thai half-Chinese Christian or a Javanese half-Bajau Muslim. All are Malaysian and all want a better future.

In the context of our children what is important is that they know that these people exists in our society. They are our neigbours, the people that we see at shops, buy things from, sell things to. They are the ones which we should help when they ask for help, and they are also the ones that will help us when we need help. They too want their children to grow up a compasionate, intelligent and healthy member of society.

Unless we can scientifically prove that excellence are born with a certain race, it doesn't make any sense to insist a person of a certain skin colour is only eligable to run a certain public school.

Instead of trying to satisfy nonsense demands and requirements that do not improve the education level of our children, our public education should refocus itself on what is universally important to the growth of a child into becoming a young adult capable of thinking for herself what is good for her own future, regardless of skin colour or faith.

The public shool focus is on education, and not just a tool to unite society

Look at it another way: The current rheoteric that we're seeing basically also says that part of the blame for our national disunity are on schools, but when in fact schools in it's pure form should only be focusing on giving education to our children.

The subject of national unity is beyond our public schools and doesn't stop there. Our 7-year old child starting her formal education doesn't care what skin colour she is, or what colour her new friend that'll be sitting next to her in class will be.

Disunity is not a problem that the schools started

Every child when born doesn't know what race or religion is. If they know that they are different than other people and should only stick to their own kind by the time they get to primary school, then the problem of disunity has started even before getting to the schools. How would we expect schools to solve a problem which it did not start?

Don't make our public schools one of the scapegoats of our inability to get our act together, and don't expect the schools to solve a problem it did not start.

Focusing on good education and it's resources

To achieve the level of education that we expect for our children requires us to step back and reasses the ability of us to educate them the way we want them to be. It is a fool's errand to say that we want the best, when we are only willing or able to move forward at a mediocre level.

Having capable teachers, and teachers who can focus only on teaching without being burdened with adminstrative tasks is a no-brainer and I know we are aware of the need to focus and fix these problems.

One other aspect that have not being discussed though is the fact that we're spreading our resources thin due to political pressure based on racial or religious identity instead of educational needs.

For example, if a child wants to learn a particular language, why would she need to go to a vernacular school to do so? Why shouldn't we give the opportunity for all our children to learn these different languages at any school that they go to?

The only obvious reason this is happening is that we don't have enough capable teachers to go around all of our schools.

It does not make rational or scientific sense to say we need a totally different school stream just to learn a language.

Instead of having teachers assigned to different schools all over the country, we should have lesser amount of schools. The different languages, or subjects that are being taught differently at vernacular schools should be made avaialable and taught at all the schools that we have.

What works at the the better schools should be shared and emulated among other schools, increasing the education level bar evenly across all our schools.

Robin, one of the callers pointed out that vernacular schools strive because they do offer something or maybe even do something better which are missing from the national schools. We should figure this out, and emulate them on all our schools.

It makes sense to have a single stream school, where everyone can learn all these different languages with everyone else. We will have a single budget, and a single focus on education, practicing best practices learned via a single way to run all our schools, with less overhead burden due to the different wants or political needs that has nothing to do with a good education. Our teaching resources will be more focused on teaching rather than than be bogged down by non-educational matters.

Within the public education sphere, languages should be regarded as just another tool to communicate and to educate our children, and are just subjects to be learned instead of them being symbols of racial or religious identities.

Mixed signals: It's confusing and it's insane

Judging from the perspective that our general public is viewing our school system, we're not doing very well. Most of us complain that our children are being burdened by more and more things to learn, and at the same time they are not getting to know one another any better.

Year in and year out, we focus on the amount of As that our children get, how many did not get the scholarship that they want, how many couldn't speak good English, and how they are getting more and more polarised day by day.

But the fact is in essence we're not changing the way we're teaching our children. We think we give them education by adding all these new information and subjects at school for them to pass exams, and we think we're giving them "education", but are we?

When we read the news of children killing themselves because they did not get the results that they wanted, we raise our hands and say what have we done?

But we continue to demand As as if this is the only way forward and complain when there is not enough places in the universities because tens of thousands of other children also received more As.

The same goes for putting the schools as a scapegoat for our disunity. We say we want our people to unite and be treated as one and as equals, but when we say all our schools should be one and all our children learn under a single roof, we raise our hands and shout and say that we need to protect culture and it's racism and discrimination.

We are just making our children confused by saying something and doing something else. They will just grow up cynical and untrusting of the adults they see, and worst, they will grow up into those exact same adults.

Now, sixty years down the road when we started of with our current formula of education, have we achieved in terms of quality or strength among our society that we wanted to achieve at that time? Just judging from what our society is debating right now, it does not seem so.

If we expect different results now, but without changing the approach we have been taking all this while, we are insane!

Our multiculturalism does not die with the schools.

It dies when we only care about our own lot.

Remove all references to a particular language or race types of school, from vernacular schools, the Malay College to the MRSM schools by MARA2 schools and make all these schools accessible without prejudice to any child of Malaysia.

If we want to play divisive politics and call out each other by their skin colour, fine. But leave our children and their schools out of it.